Splashing into a Crazy Weekend

Welcome back readers! Wow has it been a busy week! This past Wednesday, the apes returned from their long awaited river trip, filled with stories and smiles! As Rose Kesselman, one of the counselors for the female Apprentices put it, “ape trip was a breeze because we were having so much fun. The sunsets were […]


Wow has it been a busy week! This past Wednesday, the apes returned from their long awaited river trip, filled with stories and smiles! As Rose Kesselman, one of the counselors for the female Apprentices put it, “ape trip was a breeze because we were having so much fun. The sunsets were impeccable and Bob cooked us dinners like no other! All in all, Ape trip was a blast and was truly unforgettable.” After the Apprentices returned, the entire camp gathered in the Rec Center to observe Tisha B’av. For those that don’t already know, Tisha B’av is one of the most solemn days in Jewish tradition. On this day, we recognize and remember the destruction of the first and second temples in Jerusalem. At Camp Modin, we also remember the many atrocities that the Jewish people, along with other groups, have had to endure. The service is absolutely beautiful, and was led by Cantor Sheera Ben-David, along with Howie (the camp director), Sammi Maza (current Office Manager, but also has been at Modin for 13 years and was an Ape of 2015. She has a stunning singing voice), and counselor Julian Brenman (who plays guitar and piano and also has a great voice)! The service includes many breathtaking songs and poems that really incapsulate the true meaning of the day. On Thursday, many of the older kids choose to fast, and had services and movies throughout the day. For everyone not fasting along with the younger bunks (Bunk 3, Eagles, and below), there was normal bunk activities!

On Saturday after services, the Apes led the camp in an extremely fun full camp activity: Water Day! There were various stations all around camp of different water activities. Since this summer has been very hot, the activity was perfect for a refreshing and exciting afternoon. At one station, the camp slip n’ slide was set up for all to race down! At another, the campers played Drip Drip Drop, a version of Duck Duck Goose where one person takes a wet sponge and walks around dripping water on everyone. When they get to the person they want to tag, they squeeze out the entire sponge on them! At a third station, there was the classic water balloon toss, where you take a step back each time you catch the balloon. The apes also had an obstacle course, where you could be sprayed with water guns while you’re running through, a station where the kids had a sponge fight (a personal favorite, as it was dodgeball with sponges!), and a water pitcher relay race. Overall, the activity was a huge hit and helped us all cool down after a week of summer heat!

The fun did not stop there! On Saturday night we had our camper talent show! Campers of all ages took the stage to showcase their many talents. From diaboloing to singing to dancing, the talent show had it all. Some fan favorites included a full band made up of many Apprentices, three different acts with many talented gymnasts, and some talented singers that got the whole crowd singing “Say You Won’t Let Go” by James Arthur. The talent show was hosted by two Apes of 2017, Ian Ressler (a first year counselor in the T-Birds) and Aaron Silverstein (a second year counselor in the Eagles). Immediately following the talent show, the whole camp joined together to close out Shabbat with Havdalah. During Havdalah, we have a tradition of honoring one to two counselors or campers with a Modin Mensch award. The award is a huge honor and is used to celebrate the best of the best. Last night, the first Modin Mensch was Shelby Gauthier, a first year counselor in Bunk 1 who is this year’s gymnastic supervisor! The second was Adin Moses, a second year counselor in the Beavers who also was a camper for 8 summers (Ape of 17)! Both were extremely deserving of the award and have worked extremely hard at camp.

Today, we’ve gone back to our typical routine of morning bunk activities and afternoon free choice. We are all a little sad, as the first session comes to a close. While most campers are staying for the whole summer, we had to say goodbye to about 30 campers who left today. We cannot believe how fast the summer is going, but we can’t wait for all that this next week and a half have in store!

We’ll be back soon with another blog, presumably about the impending Mo & Din Break! Any day now!

The beautiful colors of autumn on a warm sunny Oct

All of us at Camp Modin wish you, your family and

Construction on complete upgrades for our six lowe

Here’s to the last Shabbat of the 100th summer!

The Apes enjoying a classic camp cook out at Modin

The Beavers getting into the full swing of shaving

The Apes are back!!!

Check out this blog all about the best Jewish summer camps!

Want to know the best Jewish camp in America, check out this article... spoiler alert Modin makes the list.... 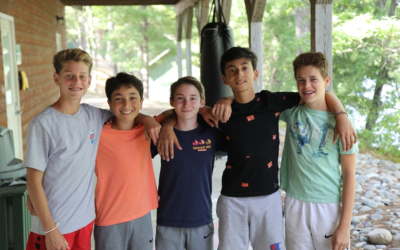